Background and objective:Planting of fodder plants with high production potential and high quality and adapted to Iran's climate conditions due to lack of forage in Iran has been considered. Today, in addition to common indigenous cultivars, sorghum hybrids cultivate growing in Iran is increasing. Not only does sorghum have a high yield, but it is well adapted to climatic conditions in most parts of Iran, especially in dry and temperate regions. This plant is able to absorb water better than other grasses This plant is one of the most important forage forests in arid and semi-arid regions of the world. It can be productive due to adaptation to warm conditions and to a certain extent soil salinity and high water use efficiency. The purpose of this study was to determine the amount of yield, chemical composition, silage properties and energy metabolism, digestibility of organic matter, digestibility of organic matter in dry matter and volatile fatty acids by the method of gas production of forage sorghum cultivars.

Materials and methods: In order to investigate the fermentation quality and nutritive value of five variety of sorghum silages, different sorghum cultivars Viz: ICRISAT623×R165, ICRISAT632×R165, ICRISAT625×165, ICRISAT520×166 and Speed feed were compared in completely randomized design with five replicates. For this purpose sorghum cultivars was obtained at dent stage, chopped with an average particle length of 2 cm and were preserved in 10kg plastic boxes. Silos were kept at room temperature and opened at 45 days for determination of pH , DM, CP, EE, ADF, Ash , WSC and NH3-N. The Gas productions were used for determination of digestion and fermentation of samples.
Results: maximum dry matter by 1400.5 Kg per hectare and metabolism energy by 131627 Mcal per hectare obtained in ICRISAT520 ×R166, Whereas cultivars Speed Feed provided Minimum. The highest gas production , metabolisable energy, water-soluble carbohydrate (WSC), Volatile fatty acids and Ether Extract was observed in ICRISAT625×165. Whereas ICRISAT520 ×R166 and ICRISAT632×R165 had the lowest. Results indicated that there were significant differences between different cultures in %DM, %OM, %CP, %EE, %Ash, %ADF, %WSC and %NH3-N.The ICRISAT 165 × 165 has the highest amount of cumulative gas, metabolisable energy, soluble sugar, volatile fatty acids and crude fat. However, ICRISAT520 × R166 and ICRISAT632 × R165 had lower values. There was no significant difference between cultivars in estimating of organic matter digestibility (OMD) and digestible organic matter in dry matter (DOMDM) using the amount of gas production.
Conclusion: Based on the results of this study, ICRISAT520 × R166 for dry matter production (18487 kg ha-1) and protein production (1400 kg ha-1) is recommended for cultivation in Golestan province. But in terms of yield per hectare, ICRISAT625×165 varieties is recommended for the rest of the cultivars. 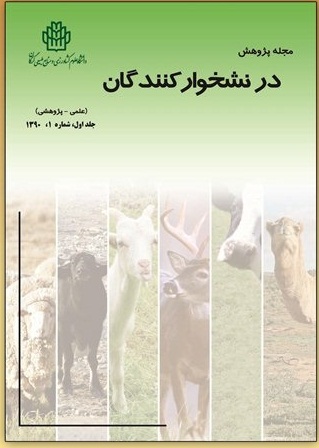